QR Codes In China And The Troubling State of Tech Reporting

A slide deck by Mary Meeker, partner at Kleiner Perkins, has been making the rounds: 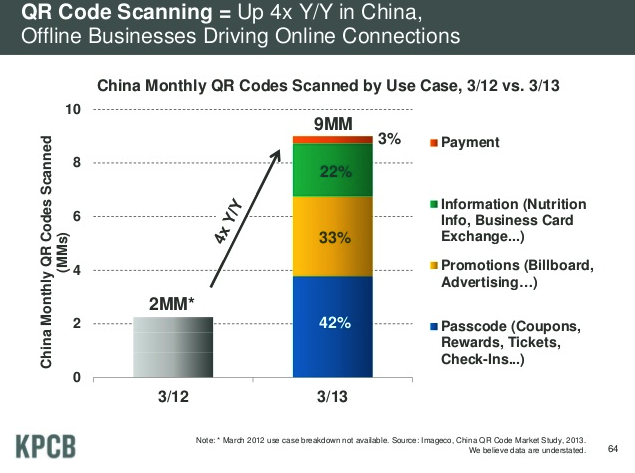 That certainly looks impressive! The audience is left to conclude that QR code adoption in China is turning out to be quite different from what it’s been like in the U.S.

But something about this smelled fishy to me. China is a country of 1.3 billion people, so 9 million of anything isn’t that big. If those 9 million scans were performed by 9 million different people – a presumption that’s highly optimistic – that would mean just 0.7% of the population scanned a QR code.

But surely, the 4X year-over-year growth is something notable, right? Not when you consider that QR code usage will go up as more people use smartphones. A mere three slides later in the deck, we see how much iOS + Android usage has grown in China: 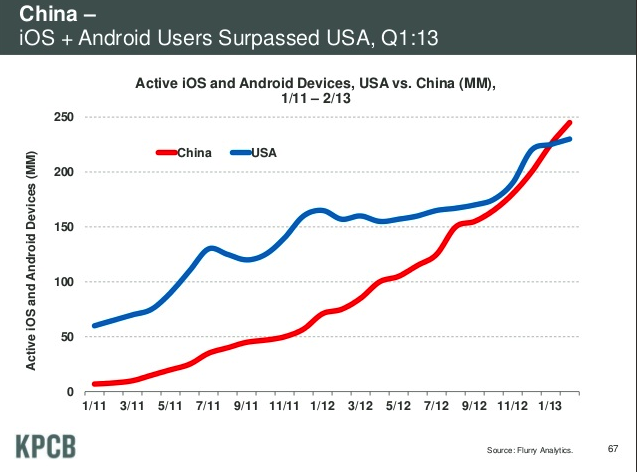 In February 2012, China’s active base looks to be around 70 million, which grew to nearly 250 million in February 2013. So year-over-year growth in nearly the same time window is about 3.5X, which almost fully accounts for the 4X growth in QR code scanning.

Based on this quick analysis, QR codes look to be as much a dud in China as they have been here in America. Certainly not as impressive as the slide makes it out to be.

I searched Google to find corroborating data, and instead saw that the tech press has been breathlessly reporting on that same slide I had noticed:

All these articles simply repeat something that was stated, in some cases verbatim, without even a hint of any critical thought going into the production of content.

So who’s at fault here? On the individual level, Meeker should have done a little more digging into why QR code usage has risen, especially considering that the answer was right there three slides later. Each of the articles linked to above were written by tech reporters, and they bear the brunt of responsibility for not doing any due diligence for their readers.

But the real fault lies in the broken institution of journalism itself. The tech industry, particularly around consumer Internet and mobile, is severely underserved by its reporters. The quality of journalism is consistently bad – lacking depth, insight, and expertise. Original, long-form reporting is rare. Pundits with opinions have disproportionate mindshare, particularly those who write about Apple and Google. They certainly drive pageviews. But punditry alone isn’t good enough.

The Wall Street Journal is the most widely circulated newspaper in America. Imagine if it only consisted of its right-wing editorial section. Sure, those pundits might be able to attract some readers, but not nearly enough to be sustainable. The reason the Wall Street Journal is so successful is because it produces extremely high-quality journalism around business and finance. It serves its industry very well.

So what the tech industry needs is an equivalent of what the Wall Street Journal is to those in the finance industry. Or maybe – and excuse while I hold my nose – what POLITICO is to Washington, D.C. and political junkies.

The current outlets just don’t cut it. The newspapers in Silicon Valley don’t have much reach. On the Web, Ars Technica and The Register produce quality material, but not enough. The hugely popular gadget blogs are more about consumerism as entertainment instead of the technology that’s really at the heart of the industry: software.

Imagine a news organization that had the technical expertise and industry connections to really dive into the Heroku/RapGenius kerfuffle, or the Adria Richards incident, or why exactly Ruby on Rails had so many critical security patches a few months ago. This industry is so important, and it deserves better journalism.

It’s time to do something about that.