What I'll Miss Most About Google Reader: Speed and Magic

Last week, Google announced that it plans to shut down Google Reader later this year. I’m a passionate fan of Google Reader – using it several times a week – and I was very disappointed to read about the decision.

I’ve been heartened to see the flurry of activity around building a replacement, culminating with the announcement that Digg is planning their own Reader.

In the midst of the hand-wringing and petition-signing on Twitter, I saw an astute observation:

Lots of boo hoo about Google Reader. Not much mention of any specific feature that dies with it.

Must be frustrating. Google Reader competitors reading this whining get no insight into what to create to replace it.

So as a sort of PSA to whomever builds the next feed reader I wind up using, here’s what I think makes Google Reader so special: speed and magic.

For an app that displays lots of content from many different sources, Google Reader is consistently fast. It’s snappy. I click – and boom! – I see what I wanted to see. The load times are nearly imperceptible. Sadly, the alternatives I tried this week were decidedly un-snappy.

But more important for me – as a practitioner of a mouseless lifestyle – is Google Reader’s extensive support for Vim-like keyboard shortcuts. 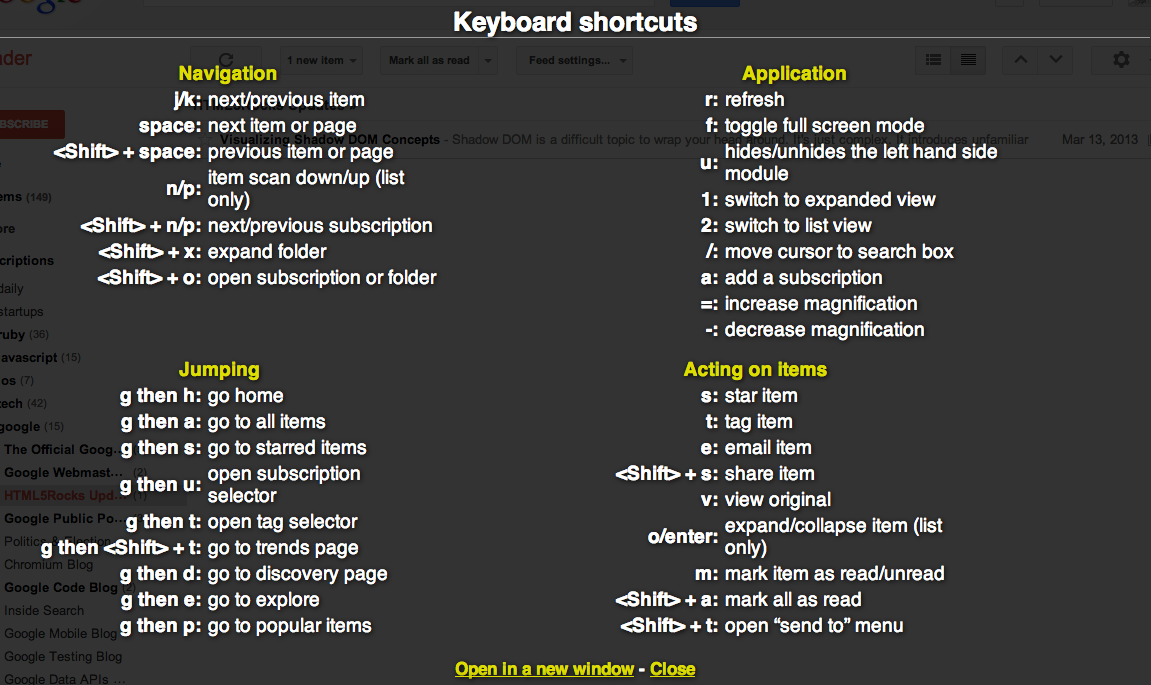 Those jumping shortcuts (g then _) are game-changing. So, so good. The movement key choices are actually a bit quirky. I find myself hitting the ‘N’ and ‘P’ keys more than the home keys like ‘J’ and ‘K’. But over the years I’ve developed muscle memory, and I go into a zen-like state when processing my feeds.

The next feed reader I use needs to work as fast as I can think. It needs to load content quickly, and it needs to have Vim-like keyboard shortcuts baked in.

To subscribe to a blog through its feed, one must find the RSS (or Atom) link somewhere on that blog. This takes some technical savvy. There’s a <link> tag that makes it browser-discoverable. If the blog doesn’t have that, it may have an RSS link or that orange icon somewhere in the header, sidebar, or footer.

In recent years, I’ve noticed that some blogs just don’t provide any sort of link to a feed. No <link> tag that gets detected by a browser. No RSS icon. And that’s where Google Reader’s magic comes in.

Because in that “Subscribe” box, I can pop in the URL of the blog I want to subscribe to, and Google Reader just knows the feed for it. It’s never failed me. It. Just. Works.

The next feed reader I use needs to be a little magical when it comes to feed detection, because I don’t have the patience to hunt down feed URLs. Taking it a step further, I’d like a browser extension that automatically adds the blog I’m viewing directly to my feed reader and doesn’t interrupt my flow. It should Just Work.

There’s a larger point here: Speed and magic are the two most important virtues of great web apps. Be as fast (or faster) than the user can think. Don’t make the user wait. And delight the user by providing magically pleasant experiences.

Google understands this; those virtues are what make the best Google products so great. I consider Google Reader to be one of the best web apps ever made. Here’s hoping that the creators of the next great feed reader keep speed and magic on the front burner.